Hall of Fame Authentics / Don’t Call it Sports Memorabilia. Call it an Investment

Don’t Call it Sports Memorabilia. Call it an Investment

Like the raw canvas on which a great work of art can be painted, the right jersey or ball or pair of shoes can be imbued with incredible meaning and value for collectors of sports memorabilia. Consider one pair of Nike Kobe 7s displayed at the Nova Gallery in Pasong Tamo last night, Wednesday, May 23. A similar pair of shoes might only cost you seven or eight thousand pesos at retail. But because these particular shoes were worn by Kobe Bryant himself in one of his final games against the Boston Celtics’ complete big three (Paul Pierce, Ray Allen, Kevin Garnett), and then also signed by the now-retired Black Mamba, you can expect to pay seven digits for them today.

Such is the business of Hall of Fame Authentics, aka HOFA—the authorized Philippine representatives of sports memorabilia companies like Upperdeck and Steiner Sports. HOFA carries authentic sporting relics: jerseys, basketballs, sneakers, boxing gloves, posters, and more—all signed or game-worn or in some way covetable by sports fanatics and athlete devotees.

Among the other items that were displayed at the Nova Gallery were signed LeBron James jerseys, a signed one-of-eighty-one Kobe Bryant jersey to commemorate his legendary 81-point game, a pair of signed and game-worn Air Jordan 11s, a Wilt Chamberlain-signed basketball, and a pair of Cleto Reyes gloves with the autographs of both Manny Pacquiao and Floyd Mayweather. They also have relics from yet-to-be legends like Russell Westbrook, Kevin Durant, Sixers rookie Ben Simmons, and even Lakers rookie Lonzo Ball (a pair of autographed Big Baller Brand Zo2s). 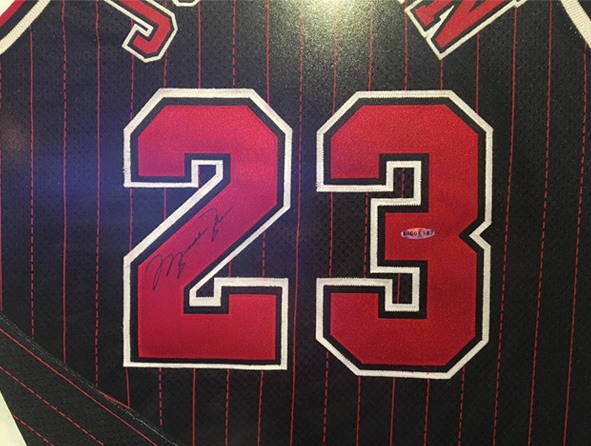 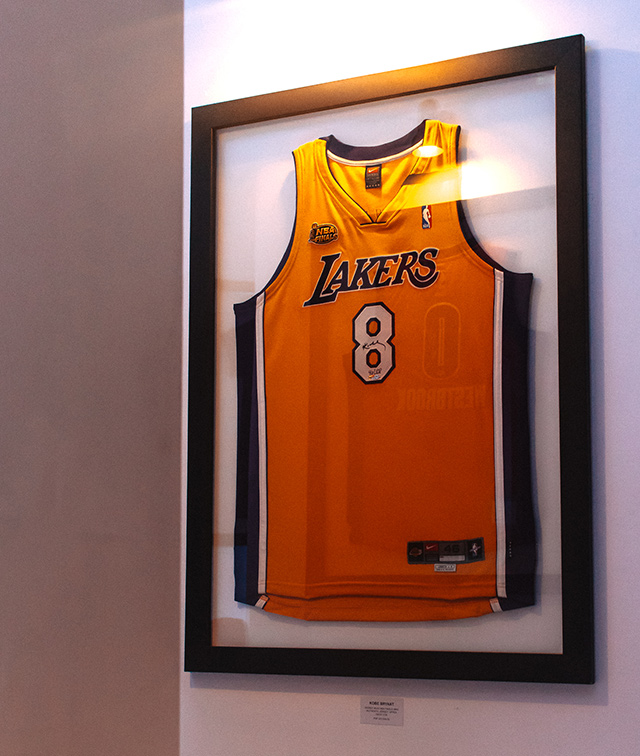 Like any great passion project, HOFA started with an obsession. Ron Uy, one of HOFA’s managing partners, is a huge fan of Kobe Bryant. So when Bryant came to the Philippines for his Supernatural Tour in 2007, Uy was there. “I was one of the people who camped for like a day in advance, waiting for Kobe to get to the BGC branch of Nike,” he recalls. “Then when he had the showcase at Ultra [Sports Complex], Kobe started throwing autographed balls to the crowd—about five or eight. And I was super disappointed that I didn’t get any.”

So Uy began his search to fill the void. “I realized that I really want something that Kobe touched; I wanted to have a connection with Kobe. So I went online, and I searched on eBay, and I saw that [autographed] ball. I was like, ‘Okay, a hundred dollars? I’ll buy that. It’s less than a shoe.’ I was so excited, I was so proud, I displayed it in my home.” He ended up paying another $100 for shipping and customs.

But as it turned out, the ball was a fake. Undeterred, Uy continued to search for the real deal. “Okay, I got a fake ball, move on. How do I get the real legit ones? That’s when I started researching about companies like Upper Deck, Steiner.” The rest is HOFA history—and the guarantee that what you get from them is nothing short of legitimate. 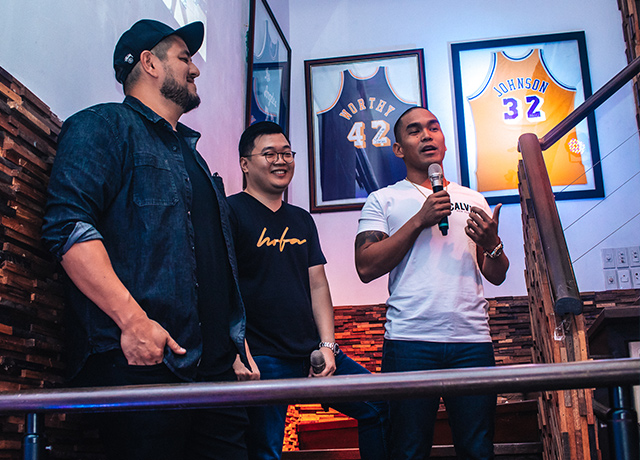 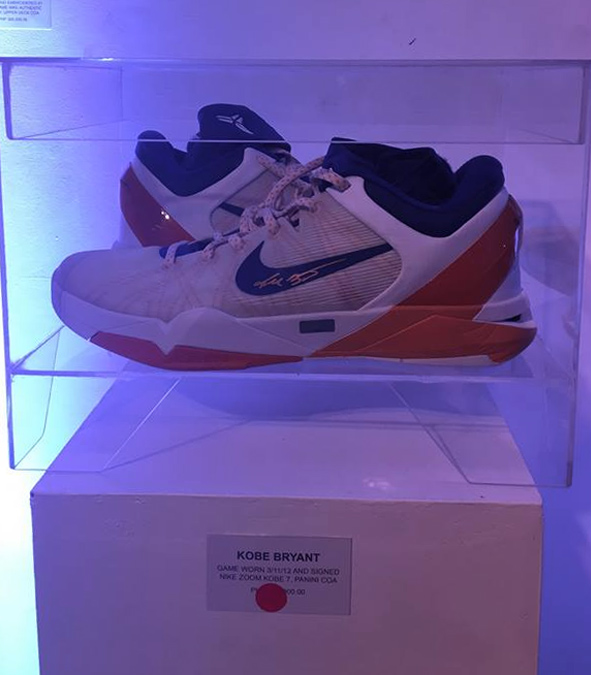 And if even then you’d have trepidations about dropping huge sums of cash for sports artifacts, it helps to think about them as investments. “People are hesitant with the prices of everything because they’re so expensive,” explains HOFA Managing Partner Tep Songco. “But there’s an investment side to collecting sports memorabilia. The prices here appreciate every year.” He recounts his own experience with monumental increases: “I sold my car for the game-worn [Air Jordan 11] Concords. I had a spare car—a Toyota Fortuner. I saw that [shoe] on eBay and I immediately bought it, because I knew the item would appreciate, instead of my car that after ten years, wouldn’t have value at all.” He estimates that one of the items he bought with the money was worth about P400,000 at the time. Now, the same item is worth over two million. “Don’t be scared of buying sports memorabilia. It’s not a dead investment.”

Ron Uy has his own such story, about the Kobe sneakers that are now worth about a million pesos. “I was able to buy a pair of game-worn Kobe Bryant shoes. I got this shoe way back in 2014, before Kobe retired. I was able to get it from the company [at] SRP (suggested retail price): $5,000. Then when Kobe retired in 2016, they were sellling game-worn shoes for $18,000.”

Other items displayed at the galllery saw similarly remarkable increases in value: some now worth P300,000 were in the five-digit range just a few years ago. It’s a testament to the value of sports heroes and stories, and how they can be represented by objects that become works of art. 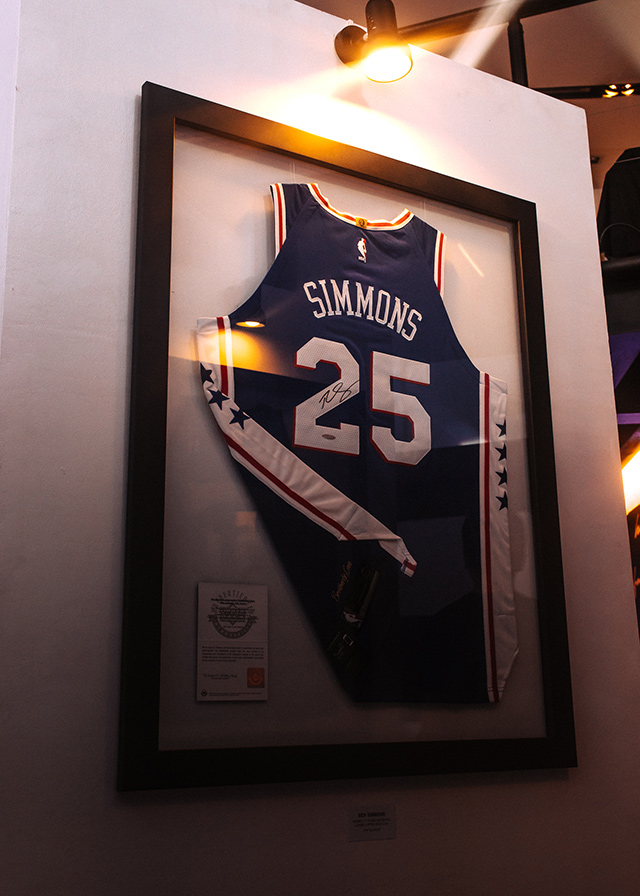 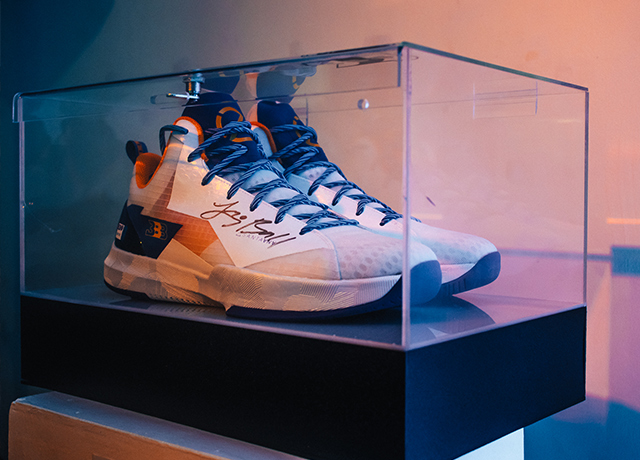 If you’re interested in having your own collection of sports artifacts, the guys behind HOFA recommend starting with a team you love and follow religiously—or perhaps with rising stars like Ben Simmons and Markelle Fultz. Pick the right player at the right time and you almost can’t lose; you’d only need to be sure that your source is authentic, which, with them, is absolutely nothing to worry about.