Kobe Bryant fan Ron Uy clearly remembers the day in September 2007 when the Black Mamba visited Manila. He was one of the many die-hard LA Lakers fans who lined up overnight at the Nike store in Bonifacio High Street to get a glimpse of the NBA superstar. Like the others, Ron also made the trip to Ultra where the American baller played an exhibition game and gave away a couple of autographed basketballs.

Ron knew that to get his hands on one of those signed balls was a long shot, and that it was clearly impossible to get near Kobe, much less have anything signed by him. “Security was so tight,” he recalls. At that time, Ron was already a big sneakerhead, collecting every kind of Lakers footwear or merch he could get his hands on. But he never once had anything signed.

That September day he saw Kobe, Ron was overjoyed. But he also found himself utterly disappointed he didn’t get one of the basketballs with the NBA superstar’s signature. So to appease himself, he went on eBay and purchased a Spalding basketball autographed by Kobe. “Back then, I didn’t know that it had to be authenticated. I didn’t know that it had to have certificates,” he recalls. “So basically, the ball I purchased turned out to be one with a fake signature.”

It was an expensive mistake, but it also became a huge learning experience that drove him to learn more about the hobby of collecting sports memorabilia.

Ron’s friend Stephen Songco, on the other hand, is a different story. First off, he’s a Michael Jordan fan. But not unlike Ron, he was also a sneakerhead. When he saw Ron’s authenticated Kobe memorabilia, he got pretty envious. He researched online how he could make His Airness sign a pair of shoes he bought. And he came across a site that offered this service. 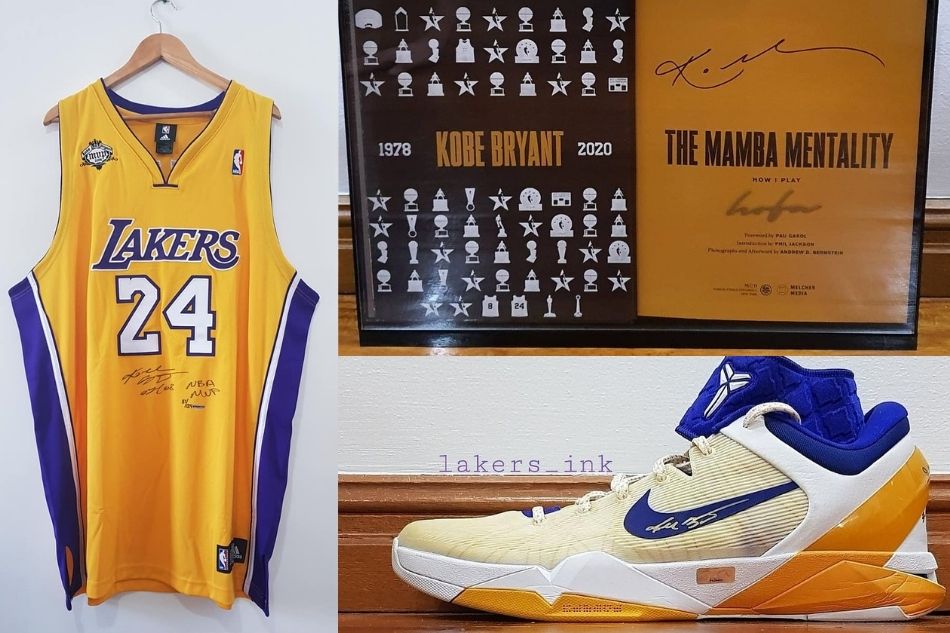 The price they agreed on was $1250, or roughly P60,000. Fearing he might get scammed, Stephen sent only the right half, paid the amount, and waited a couple of months. “The shoe came back with Jordan’s signature and a certificate,” Stephen recalls with delight. “That was how I started with my collection of signed NBA memorabilia.”

Their experiences as collectors over the years and their intent to educate others about the hobby prompted Ron and Stephen, along with another NBA memorabilia collector, Elvis Gutierrez, to start a company in 2018. It would sell sports memorabilia signed by the superstars themselves. They call their startup Hall of Fame Authentics, or HOFA.

“I found out through some market research that there is an underserved market on signed sports memorabilia in the country. So we thought, why not create a company that sells them here in the Philippines,” says Stephen, who was then taking up his Master in Business Administration at Asian Institute of Management. The trio created a business plan and submitted it to their partners in the United States, eventually giving HOFA license to sell the precious mementos in the Philippines.

Why is it important for collectors to obtain signed sports memorabilia that are authenticated?

“You are buying something that costs a significant amount of money, so you have to be sure that what you’re buying is authentic,” explains Ron. “You’ll be displaying it in your house. You’ll be so proud of this item, and then you’ll find out there’s a chance the signature might be forged. That would take away the joy and the value from the signed sports memorabilia.”

With HOFA, sports fans are assured they’re paying for authenticated items, says Ron and co. They have a partnership with outfits like Upper Deck, Panini America, Steiner Sports, and Fanatics, which have exclusive contracts with the athletes. Company representatives are present to witness the actual signing session of the memorabilia. The authentication process is stringent, says Ron, and that is the reason why the prices of these items are extremely high.

What happens is if a client wants to buy a particular item—say, a Michael Jordan jersey—HOFA then directly approaches their partner, Upper Deck, to check the item’s availability. “We don’t buy the items and resell them. Our price is the same as the international retail price. We are their authorized online resellers,” explains Stephen.

“We don’t sell any third party certificates because we want to make sure that our clients only get something that’s 100% legitimate. Wala silang duda that the items were held and signed by their idols,” adds Ron. 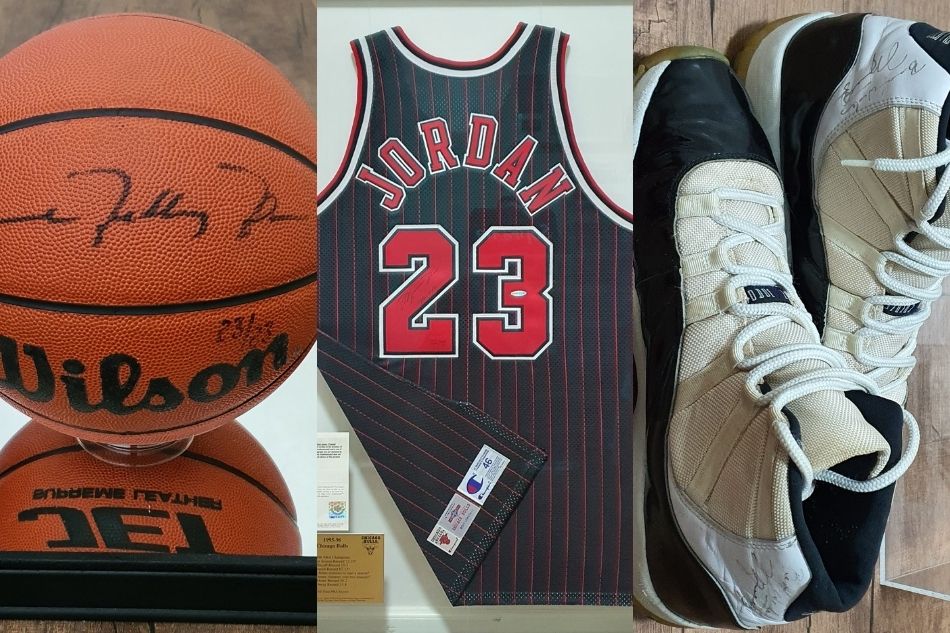 Asked about the most prized sports memorabilia in their personal stash, Stephen says it’s Michael Jordan’s game-used shoes, which he bought for P400,000 in 2013. “I sold my Fortuner to buy those shoes,” he says seriously. “I thought back then, after 10 years, the value of my car would have depreciated, whereas if I invested on the shoes, these would surely appreciate in value. Siguro ngayon conservatively nasa P2 million na ang price ng shoes ko, after eight years.”

To take care of his precious sneakers, as well as his other collections, Stephen bought a dehumidifier which sucks the excess moisture from the air since the weather in the Philippines is very humid. “Sa experience ko kasi, nagkakaroon ng mold ang shoes. So I got the dehumidifier to maintain the humidity level in the room to between 40 to 55,” he says.

As for Ron’s prized memento, it’s a pair of Kobe’s game-worn shoes, which the collector got in 2012. “At that time, I wanted to get something really premium, something that only I had. So I contacted my friend in the US and he was able to get me a game-used pair of Kobe Bryant shoes worn [in a game] against the Boston Celtics. I got them from Panini for P250,000,” he says.

It’s a different kind of high, Ron shares, having the said shoes in his possession. “I made sure to download the actual game that Kobe played wearing those shoes. Sometimes when I’m not doing anything, I still watch the game and look at the shoes and I can’t believe that I’m lucky enough to own a piece of history, a piece of Kobe’s career, especially as a Lakers fan. I was so lucky to get something that he wore against the Boston Celtics, their harsh nemesis,” he says, smiling.

Has he tried them on? “Oh no!” he answers. “I wanted to preserve them as much as possible.”

Ron made sure to put them in a big glass case along with packs of silica so moisture doesn’t get in. Like his other collectibles, he keeps the shoes in a room that doesn’t get much sunlight.

Ron has no plans of selling his prized sneakers. As for Stephen, he says he’s willing to give up a part of his collection for a chance to have a selfie with Michael Jordan himself. 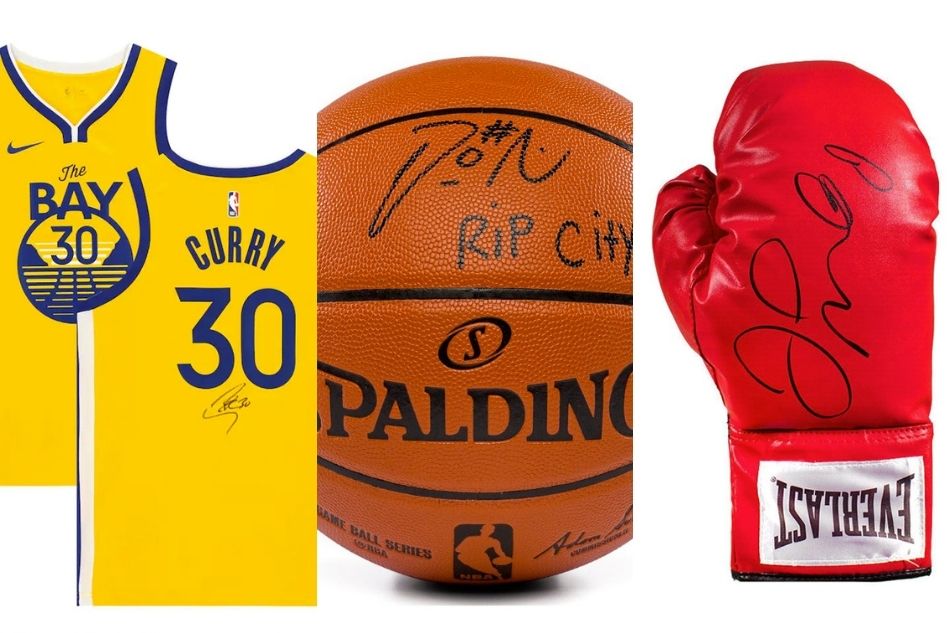 Asked if there are sports items they still dream of having, Stephen says it’s a Michael Jordan jersey, which possibly costs around P15 million now. Ron, on the other hand, admits he’s been eyeing an actual piece of the Staples Center floor for some time now. You know, because Kobe won five championships on it. “Before Kobe passed away, it was around $8,000. It now costs $40,000.”

For now, they’re just a dream, Ron and Stephen say—but with their major league connections, getting their hands on these coveted items seem closer than we think.